Professors of the Department teach general and special courses: "Seismic prospecting", "Radio electronics", "Well logging", "Mathematical processing of seismic data", "Seismic exploration of heterogeneous and anisotropic media", "Seismic interpretation", "Seismogeology", "Marine seismic", "Ground-penetrating radar ", etc. A number of textbooks and teaching aids prepared by the staff of the Department are actively used in teaching. Among them is a training computer course on the physical fundamentals of seismics created by the teachers of the Department under the guidance of Professor A.V. Kalinin, the first textbook for universities in Russia called "Geophysical Research of Wells", the textbook by A.V. Starovoitova "Interpretation of georadar tracking data", the textbook by N.V. Shalaeva and A.V. Starovoitova "Fundamentals of seismoacoustics in shallow water areas". We have a computer class where students not only learn to program, but also master modern ways of processing and interpreting seismic data. Special courses use professional systems for processing and interpreting seismic data. Graduates and post-graduates of the Department take an active part in the field workshops "Floating University" under the aegis of UNESCO and "Seismic prospecting".

Since 2001, PetroGeoCentre - a specialized scientific and training centre for the processing and interpretation of geological and geophysical data for the exploration, exploration and development of oil and gas fields — has been operating on the basis of the Department of Seismometry and Geoacoustics and the Department of Geology and Geochemistry of Fossil Fuels, Faculty of Geology. The company Landmark Grafics has provided software for research in the course of oil and gas field development.

The team of the Deep seismic prospecting laboratory, headed by Doctor of Geological Sciences, Professor V.B. Piip, is engaged in reinterpretation of data obtained by deep seismic sounding and the method of refracted waves in various regions of the world (Kamchatka, Sakhalin, Eastern European Platform, Western Siberia, the Barents Sea, Tibet, etc.).

The staff of the Geophysical Well Research Laboratory are engaged in assessing the fracturing of oil and gas reservoirs, as well as developing a theory, methodology and equipment to intensify the flow rates and injectivity of oil and injection wells using geophysical fields of various nature, frequency and intensity. 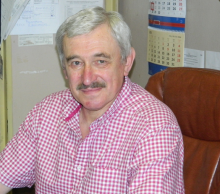