Department of Geology, Geochemistry and Economics of Mineral Resources

The structure of the Department includes educational and scientific laboratories of: ore microscopy; microthermobarometric; schlich; ore-petrophysical, hydrothermal modelling. In 1994, the Department organized an inter-departmental laboratory of economic geology. The Department has training classrooms of drilling, mining, primary ore separation, models of mineral deposits. The Faculty training base in the Crimea is equipped with a drilling station for drill training field work.

Professors of the Department give lectures on "Geology of Minerals" for students of all geological specialties. In addition, the department provides about 40 special training courses, including "Mathematical processing of ore research data", "Fundamentals of mining geometry", "Modelling ore deposits", "Industrial types of nonmetallic minerals", "Economy of mineral raw materials", "Thermobarogeochemistry", etc.

In the period from 1999 to 2003, a number of new textbooks by professors and teachers of the Department have been published: "Minerals of the World Ocean" (VV Avdonin, VV Kruglyakov, IN Ponomareva, EV Titova, 2000); "Financial and economic assessment of mineral deposits" (AL Dergachev, J. Hill, LD Kazachenko, 2000), "Structures of ore fields and deposits" (VI Starostin, AL Dergachev, Zh. V. Seminsky, 2002)..

The Department carried out scientific research in many regions, including the Caucasus (1955-1960), the Southern Urals (1962-1968) and Eastern Kazakhstan (1968-1992). In addition, the staff of the department have studied the deposits of construction materials in Moscow region, crystal raw materials in Kazakhstan, Aldan and Priirtyshye, deposits of ferrous metals in Kazakhstan, gold in Siberia, rare metals in Transbaikalia and the Far East.

Particular attention is paid to the deposits of pyrite ores of copper, zinc and lead in the volcanogenic complexes of the Caucasus, the Southern Urals and Rudny Altai. Within this framework, professors GF Yakovlev and VV Avdonin developed the fundamental principles and methodology for compiling prognostic-metallogenic maps of ore regions in palaeovolcanic areas. A method of paleovolcanic analysis has been introduced for pyrite-bearing provinces. An original classification of ore-bearing volcanic structures was created. On the basis of the prognostic-metallogenic map of the Rudnyi Altai created for the first time, the Tishin lead-zinc deposit, the largest in the region, and a number of smaller deposits were discovered. Professor N.I. Eremin first established the phenomenon of latent mineralogical-geochemical zonation, arising as a result of a regular change in the composition of ore-forming minerals in the contour of the ore deposit, which reflects the evolution of the physicochemical conditions of ore deposition and metamorphism. Another fundamental direction, created and actively developed at the department, is thermobarogeochemistry. It is associated with the research and teaching activities of Professor NP. Ermakov and his students - Professor F.P. Melnikov and others. .

Professor V.I. Starostin developed a new direction in the study of geological structures - structural-petrophysical analysis, based on a theoretically established and experimentally verified regular relationship between the physical and mechanical properties and structure of solids. Owing to the creation of a laboratory for ore microscopy equipped with microanalysers, ore mineralogical and geochemical studies of deposits of various genetic and formation types have been developed at the department. As a result, a large number of new minerals have been discovered and minerals concentrators of many rare metals have been identified.

Since 1974, the department has begun computerization of the educational and scientific process. N.N. Shatagin created a laboratory of electronic computing methods, which, in addition to teaching purposes, solves the problems of studying the energy of endogenous ore formation processes.

Most of the professors and teachers have had scientific internships abroad and given lecture at the universities of the USA, France, England, China, Japan, Yugoslavia, Czechoslovakia, Poland, Bulgaria, Australia, Mexico, Finland, Spain, Algeria. In 50 years, the department has prepared more than 1000 specialists, about 100 of them successfully defended their Ph.D. theses. Among them are young scientists from CIS countries, citizens of Afghanistan, Bulgaria, Vietnam, Egypt, India, Iran, Iraq, Italy, Mexico, Poland, China, South Korea. 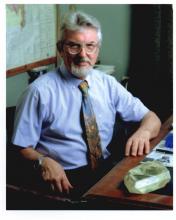