Department of Crystallography and Crystal Chemistry

The Department of Crystallography and Crystal chemistry prepares a wide range of specialists in the field of crystal chemistry, X-ray methods for studying matter, and crystal growth. Students acquire profound physical-chemical and geological training, get acquainted with modern methods of crystallographic research.

Crystallography is one of the main fundamental sciences of the Earth matter - the science of crystals, their structure, origin and properties. It is closely connected with mineralogy, solid-state physics and chemistry. Therefore, crystallographic knowledge is of great importance and is the foundation for the development of modern innovative technologies and scientific research. It is no coincidence that the world community at the 66th UN General Assembly, recognizing the importance of crystallographic knowledge for civilization and noting that the Nobel Prize has been awarded 23 times for research in this particular field, proclaimed 2014 as the Year of Crystallography.

The Department of crystallography and crystal chemistry was formed in October 1949. The founder and head of our department was the famous scientist - crystallographer, professor Georgy Borisovich Bokiy (Corresponding Member of the USSR Academy of Sciences since 1959). In 1961 the department was headed by Academician Nikolai Vasilievich Belov, a world-known scientist, whose broad range of interests and creativity amazed those around him. From 1983 to 2015, the Department was headed by Academician Vadim Sergeevich Urusov - a prominent scientist in the field of crystalline matter structure, the pioneer and creator of the energy direction in crystal chemistry. Currently, the Head of the Department is the professor of the Russian Academy of Sciences Eremin N.N., who is focused on developing the direction of the prediction and modelling of the structures and properties of minerals and synthetic compounds.

The Department has two laboratories equipped with modern instruments: the laboratory X-ray diffraction analysis and crystal chemistry named after N.V. Belov; and the laboratory of Crystallography and crystal growth. Research work of the department is conducted in one of the priority areas of the faculty - the distribution of chemical elements in the Earth's matter, the physical-chemical processes associated with the formation of minerals, rocks and ores in the Earth's geospheres.

Crystal growth, X-ray structural analysis and computer modelling of crystal structures and mineral properties are traditional directions of scientific research for the students of the Department. Research is carried out in the laboratories of the Department, institutes of the Russian Academy of Sciences and scientific and production organizations. Educational workshops in crystallography and crystal chemistry are held in the laboratories of the Institute of Experimental Mineralogy (Chernogolovka), FISC "Crystallography and Photonics" of the Russian Academy of Sciences (Moscow) and the Russian State Geological Prospecting University. Sergo Ordzhonikidze (MGRI-RGGRU, Moscow) gives students the opportunity to acquire complex skills in industrial and laboratory-based crystal growing, to get acquainted with modern methods of substance research (high-resolution transmission electron microscopy, electronic diffractometry, atomic force microscopy, Mossbauer spectroscopy), and get practical skills in cutting gemological objects.

Withing the Department functions the scientific group of theoretical modelling of the structures and properties of minerals and their solid solutions with modern atomistic and quantum chemical methods.

The purpose of the growth works carried out at the department is the creation of physical-chemical and crystallochemical foundations for the controlled synthesis of new inorganic materials with promising properties from polycomponent melts and hydrothermal solutions. Many of the obtained crystals are already applied in fiber optics, laser technology and other fields. The developed laboratory technologies, which allow researchers to grow new actively nonlinear materials with high radiation strength and thermochemical resistance, as well as new effective methods of preparation of charge for optical fibers, are protected by patents and author's certificates for inventions.

The X-ray laboratory was organized at the Department of Crystallography at the moment of moving to the new building of the Moscow State University in 1953. In the 1980s, a transition was made to personal computers for all structural calculations. The two powder diffractometers, DRON-UM and ADP, available at that time, were modernized, with their transfer to control via RS. With some additional improvements, this system is still functioning. The modern X-ray equipment in the laboratory is represented by an automatic powder diffractometer STOE Studi MP (equipped with various detectors: a linear position sensitive detector "Liner PSD", a curved high-speed position sensitive detector "IP PSD" and a temperature attachment operating up to 1500 ° C) and a single crystal XCalibur diffractometer with a 4-circle goniometer and a high-precision CCD detector.

For the training sessions and independent work of students in a computer classroom, modern programs for processing X-ray data are installed, as well as modern databases MINKRIST and PDF-2. The department presents courses on the full-profile study of structures by the Rietveld method and X-ray structural analysis of single crystals. Experimental data for these classes are obtained by students directly in the laboratory. At the present time, structural studies of minerals and synthetic phases are carried out in the X-ray laboratory of the department by the professors and students of the department and in cooperation with other departments of the geological, physical, chemical faculties of Moscow State University and a number of other organizations. In recent years, more than 50 new minerals and mineral species and their synthetic analogues have been discovered and studied structurally by the laboratory. Among the minerals discovered in recent years, six are named after the scientists of the department: belovite, georgebokiite, parageorgbokiite, lithvinskite, pushcharovskite, urusovite.

Every year, the Department of crystallography and crystal chemistry trains 15-20 students and undergraduates, including foreign students, as well as 5-6 graduate students. Graduates of the department have the skills to work with modern research equipment used in experiments on the growth of crystals and the determination of their atomic structures. The graduates of the Department are able to decipher the crystal structures; to synthesize perspective materials; to study the substance under extreme P-T conditions; to predict the properties of compounds not yet synthesized. Among the graduates of the Department are several world-renowned scientists. Our graduates work in the scientific centres of the Russian Academy of Sciences, such as: FNIIS "Crystallography and Photonics", IGEM RAS, IEM; they are in high demand in related scientific centres of Switzerland, Great Britain, Germany, USA and other countries; and they continue their scientific work within postgraduate programmes at Moscow State University and the Russian Academy of Sciences.

The textbooks and manuals created by the professors of the Department are widely used in many universities. Among them are "Crystallography" (Y.K. Egorov-Tismenko, G.P. Litvinskaya, Yu.G. Zagalskaya), "Theoretical Crystal Chemistry" (V.S. Urusov), "Radiography of Minerals" (D.Yu. Pushcharovsky ), "Theory of symmetry of crystals" (G.P. Litvinskaya and Yu.K.Egorov-Tismenko) "Crystal chemistry - a short course" (V.S. Urusov and N.N. Eremin). 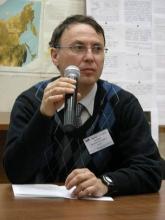